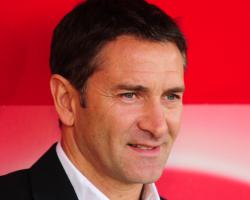 The 51-year-old Frenchman replaces Dougie Freedman, who was sacked in March after 13 months in charge of the Sky Bet Championship club.

"Nottingham Forest have confirmed the appointment of Philippe Montanier as the club's head coach," Forest announced on their official website.

"The former Rennes and Real Sociedad manager arrives at The City Ground on a two-year deal following a playing career which saw him make over 300 appearances for clubs including Toulouse, Nantes and St Etienne."

Former goalkeeper Montanier's first job as manager was at Boulogne, who he joined in 2004 and steered to promotion to Ligue 1 in 2009 for the first time in the club's history.

Montanier left Boulogne to take charge of Valenciennes in 2009 and two years later was appointed head coach at Spanish club Real Sociedad, who he guided to the Champions League with a fourth-placed finish in the Primera Division at the end of the 2012-13 season.

He returned to France to become head coach at Rennes in 2013 and led them to the Coupe de France final in 2014 when they lost 2-0 to derby rivals Guingamp.

Forest sacked predecessor Freedman in March and appointed first-team coach Paul Williams as caretaker-boss until the end of the season.

Freedman, who had lost five of his last six games in charge to leave the club in 14th place in the Championship, had replaced Stuart Pearce in February 2015.

Forest fans had grown frustrated over the uncertainty surrounding Freedman's successor, prompting chairman Fawaz Al Hasawi to issue a statement reassuring them the process was in hand earlier this month.