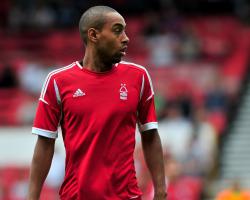 Leonardo Ulloa's injury time goal carried Brighton into the play-off places on an afternoon of high drama at the City Ground.

The Argentinian striker netted with a neat header to seal a 2-1 victory and lift the Seagulls above Reading and into sixth place.

It was the second season running that another side had sneaked into the top six on the final day at the City Ground, with Leicester having done the same last year.

However, a Forest side that was hampered by having as many 16 players injured, suspended, ill or unavailable was unable to hold out against Oscar Garcia's team.

Forest had taken the lead in the 22nd minute through Matt Derbyshire, but saw Stephen Ward fire the visitors level, before Ulloa delighted the 2,000 travelling fans with his late, late strike.Brighton spurned the chance to make a flying start, with Ulloa firing wide when presented with a fine opening after only six minutes

The Argentinian striker had the goal at his mercy after sprinting clear, but rolled his shot agonisingly wide of the post, after Dorus de Vries had moved quickly to close the angle. It proved to be a decisive moment as Forest subsequently began to dominate, with Marcus Tudgay forcing a smart save from Tomasz Kuszczak.But the goalkeeper did not cover himself in glory as the Reds made their pressure tell, taking the lead through Derbyshire

The striker made firm enough contact with a diving header at the near post, after being picked out in impressive fashion by Dan Harding's left wing cross but Kuszczak made a hash of the save, allowing the ball to slip from his grasp and into the net.

It almost got worse for the visitors when Ben Osborn flashed a fizzing low shot narrowly the wrong side of the upright.Ulloa was to be denied again, this time by a tight looking offside call after he had forced the ball home from close range, while Gordon Greer fluffed his lines when he sent a near post header well wide when finding himself unmarked at a corner.

Brighton emerged with a fresh sense of urgency after the interval - and clawed themselves level in the 53rd minute. An opportunity seemed to have slipped from their grasp when Ulloa failed to make contact with a shot from close range, following a corner - but the ball rebounded kindly for Ward, who made no such mistake, driving a low shot through a melee of players and into the net.

Forest responded quickly, with Stephen McLaughlin almost firing a spectacular second for the home side. The midfielder could hardly have made a better connection with a 20-yard volley, which he sent arrowing towards the bottom corner - but Kuszczak was equal to it, plunging low to push the ball around the post.

While Tudgay went close as well, prodding a clever ball from Majewski into the side-netting, before the little Pole was then denied himself, by another save from Kuszczak, at his near post.

De Vries saved bravely at the feet of Buckley and LuaLua bent a shot close, then in the 90th minute the goalkeeper made a spectacular one-handed stop to deny Inigo Calderon. But there was still more drama to come, as substitute Craig Mackail-Smith whipped in a cross from the left and Ulloa dived to send a header across goal and inside the far post