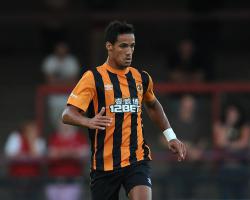 When Kelvin Wilson gave away a clumsy penalty three minutes after the break, it was game over for the Reds as Alex Pritchard converted from the spot

Michail Antonio pulled one back in the 82nd minute, but it was scant consolation for Pearce's leaky side, who have now let in 15 goals in six matches - and are seeing their promotion hopes fade away

Brentford should have had the game wrapped up by half time, with Forest maintaining their habit of shooting themselves in the foot courtesy of some woeful defending

Pearce fielded a side that was set up to be more solid, after conceding three goals in their previous two games, with Michael Mancienne playing in front of the back four - and top scorer Britt Assombalonga left out of the starting line-up

Jack Hunt's attempts to clear saw him sustain an injured that eventually forced him off, but as he rolled around in pain, Toral arrived to hammer a rising shot high into the roof of the net, from just inside the box

But, after replacing Hunt in the 32nd minute, Eric Lichaj had barely been on the pitch for two minutes before suffering a nightmare moment, as his weak back pass fell well short of Darlow and gave Gray the chance to apply a simple finish to make it 2-0 to the visitors

But they were fortunate not to go into the break three behind, with Jonathan Douglas firing wide from a great position and Gray denied by a fine save

The third goal was not long in coming, however, with Wilson producing a clumsy challenge on the speeding Gray to concede a penalty just three minutes after the interval

Pritchard converted from the spot

Fox went narrowly wide with another shot, Lansbury saw a free kick saved well by Button - who also denied Antonio - and Tom Ince was inches wide with a shot

But Darlow also saved brilliantly to deny the rampaging Gray

Forest did finally pull one back in the 82nd minute when Antonio cut in from the right for a second time, after being fed by sub Jamie Paterson, and hammered an unstoppable shot beyond Button

The home side were down to ten men by that stage when, having made all their substitutions, they saw Fox carried off injured