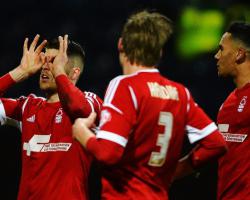 Billy Davies' hosts fought from going a goal down to Jamie Vardy's 29th-minute strike to take a 2-1 lead through a thumping header from Jamie Paterson and an Andy Reid penalty just before the break.

Nigel Pearson's league leaders were far from beaten however and, despite being a man light following Paul Konchesky's 60th-minute red card, snatched a 2-2 draw late on when Mahrez fired home amid a goalmouth scramble after Karl Darlow had saved Kevin Phillips' penalty.

Forest had been the first to threaten with Reid bending a free-kick just the wrong side of the post, while Leicester goalkeeper Kasper Schmeichel had to be at his best to push away a bending shot from Paterson.

Leicester were not without attacking menace, with David Nugent attempting to catch Darlow out with a clever, angled shot that the goalkeeper dealt with.

Forest defender Danny Collins was then left with his head in his hands after seeing Schmeichel acrobatically push his far-post header from a Reid corner onto the bar.

Leicester took the lead after a questionable moment from Darlow, who rushed to the edge of his box to contest a high ball with Nugent but managed only to punch tamely to Vardy who fired into the exposed net.

Anthony Knockaert and Danny Drinkwater both came close with long-range efforts for the visitors, but it was Forest who were to enjoy a dramatic revival.

First Paterson powered an emphatic header into the corner of the net from 15 yards after Schmeichel had only half punched clear a Reid corner, to pull the home side level on 39 minutes.

It might have been worse for the Foxes skipper, who escaped with just a yellow card but Reid delivered further punishment from the spot, lashing an unstoppable shot low to the keeper's left.

Morgan made amends with an outstanding block immediately after the interval, denying Simon Cox a certain goal by intercepting Paterson's driven cross

But Konchesky did not show the same composure as a crunching clash with Mackie saw the former Forest man shown a red card, with half an hour still to play.

It was Leicester who provided the final twist in the 82nd minute, however, after Paterson had blocked Matty James in the box. Veteran Phillips saw his penalty saved brilliantly by Darlow but James fed the loose ball to Mahrez who fired home